Unwelcome
ZOMBiE's Blog
This Blog is best viewed in 1024x786, in Firefox 3.0, Internet Explorer 6.0 or Opera 8.0 or above. Flash Player 9 or above required... That was for 10 years ago, most modern browsers can view my blog.

You accept the Terms and Conditions of cygig.blogspot once you start accessing this blog. Else, please leave immediately.

I Call Myself
ZOMBiE CYGIG

What I Do
Lazing, Hobby Crafting, DIY, Graphic Design, Computer Stuff that you don't get it

How Am I Like
Logical, Practical, Off-Beat, Anti-Social, Sarcastic

No using of my blog skin and zB Blog Tools without my permission. Some music streamed to blog can be freely distributed under Creative Commons. Others are linked from external websites.

This work is licensed under a
Creative Commons Attribution
Non Commercial
No Derivs
2.5 License.

I think I siao siao depressed le. Ya...I think I had reached the topmost level of depression, where insanity and depression comes hand in hand. YEAH!

I wanna go Nanyang Poly do NURSING! Dunno lah, such fucked up results mite as well dun go on... Not much point. Ya I think nursing is such as nice job! Hehehe. NO I isn't going to take some opportunity touch some gal's hair...

Nevermind...My Zire (the silver edition) had been put into good use these days, playing Warfare away during Math lecture, while hiding all the way at the back. I really dun feel like studying anymore liao lor. The math and physics lectures fucking empty lah. I had been sticking in the comp in FAR and trying to play Gunz.

Try it...it works on some comps in AJC and it will unlock the 100mb limitation in D drive. But Gunz still cannot be played, once in a game, it will get the 999 ping error and I suspect some firewall blocking access to the game. Shit lah...

Zire 72, mine is the Silver Edition

Warfare on my Palm, a 2mb RTS game with
wireless multiplay feature!


PW was quite sucky, they keep asking me "why up there is slanted one? Why cannot straight?", "Why there got like one patch darker one?" or "why the framing is to the left one?" Idiots...Those are just designs! U mean you prefer something so plain to be a powerpoint presentation layout? No right...The stupid projector cant even show the images properly, its washed out and blur like siao. Even black background and white text cannot bring out all the words clearly. Then someone said "I just think white text isn't right, what about blue?" Look at my layout and see how BLUE text will ever match that colour scheme. When I design the Glass Core theme, its meant to be only in dark grayish blue, shades of grey and dull yellow. Since the projector cannot project colours of the same brightness properly, dull yellow and dark grayish blue is out for sure (background is darkblue). Which is why I think white and maybe some ligher grays are the only suitable colours left. Please...no blue, dun upset the colour scheme... 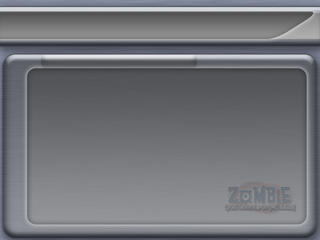 Glass Core powerpoint layout. Note that the ZOMBiE
watermark is here becos I dun wanna someone else to kope. T
he original one on my ppt wun have it.